Home News Arole to host Bola Are, Tope Alabi, others at Sounds of Joy... 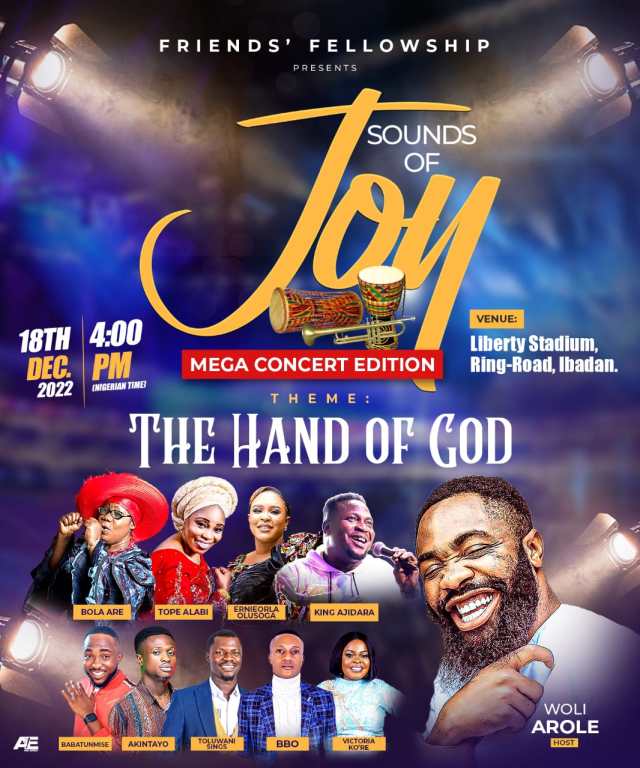 Award winning Nigerian skit maker and renowned prophetic comedian, Oluwatoyin Bayegun popularly referred to as Woli Arole will be hosting his first Mega Concert in the city of Ibadan, after several months of being out of the country.

The comedian will be the host of several A listed artistes and acts at the Liberty Stadium, Ring Road, Ibadan on the 18th of December, 2022.

The programme which is tagged “Sounds of Joy” with the theme “The Hand of God” is set to host veteran indigenous gospel singer, Bola Are, sensational award-winning singer Tope Alabi, Eya Judah crooner Kemi Rehoboth, Baba Ara sing alike King Olusegun Ajidara, among many others.

Arole has stayed majority of the year in the UK, hosting amazing events and shows. His recently concluded show in London tagged Arole Da Revelation was one of the standout events in recent times, where he hosted the likes of Asiri, Seyi Law, Josh2Funny among many others.

Arole remains one of the unique comedian in the country who has been using his talent and comics, to not just entertain his audience but to pass the message of the gospel to as many people he comes in contact with.