One Muslim Cleric “Alfa Sirajudeen” Coverts To Christianity In Lagos

A muslim alfa was reported to have embraced Jesus Christ as his lord and saviour. This was announced by Evangelist Isang on His Facebook Page informing his follwers about the situation of the convert.

EVANGELIST ISANG is Nigerian popular mimister of God who is well known for his evangelistic activities. He is the president of the LoveaMuslim Ministry. Loveamuslim is a group of devoted christiians who share their faith with unbelivers, most especially the muslim folk.

According to Evangelist Isang:

Adiyan Gasline is one of the border towns connecting Lagos State with Ogun State of Nigeria. In this town, there is a peaceful developing community called Muta 3, which has a sizeable population of both Christians and Muslims living together without any news rancor.

This quiet community recently hit the lime light on social media when a very prominent Muslim cleric and Islamic school owner popularly known as Alfa Sirajudeen, decided to dump Islam by giving his life to the Lord Jesus Christ a few weeks ago.

In fact, he has gone through a whole lot. As I write this note, has not been able to sleep in his house for some weeks now. He has really been under immense pressure but in spite of all these, Sirajudeen has remained steadfast in the Lord Jesus. I want to appeal to every Christian reading this article to please pray for Alfa Sirajudeen.

On 5th January 2020, Risalatul Haq Dawah International, a renowned Islamic Dawah Movement well know for their anti-Christian public lectures, released a statement on social media claiming that Alfa Sirajudeen has reverted back to Islam and is now practicing the Islamic faith. This message is a complete lie which exposes how Islamic organizations employ falsehood to deceive their gullible followers (Takiyya). What a pity!

The Muslim leaders are still not satisfied with their spread of falsehood both in the community and on social media. So they have invited Ustaz Jamiu Adegunwa a very eloquent and charismatic anti-gospel preacher to storm the community with his entourage and hold a public lecture over the matter of the conversion of Alfa Sirajudeen. The lecture scheduled to take place by 2pm on Sunday 12th January 2020 and they are gathering momentum for a huge event. They want to invade the land with lies but the mercy and love of the Lord Jesus Christ is waiting to arrest them.

As lead by the Spirit of the Lord, Love A Muslim Ministry shall be holding a crusade/public lecture in the same community as early as 7am on Saturday 11th January 2020, with the theme: “WE LOVE MUSLIMS BECAUSE WE ARE CHRISTIANS”. The Lord has sent us with a word for the community and by the grace of God, we shall deliver the message in accordance with his will.

May the sweet love of God touch the lives of our dear Muslim friends and bring them out of the religion of the anti-Christ.

Thank you very much and may God bless us all.” 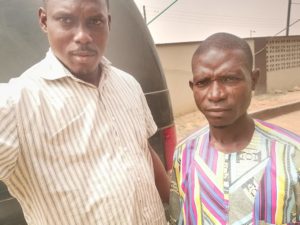