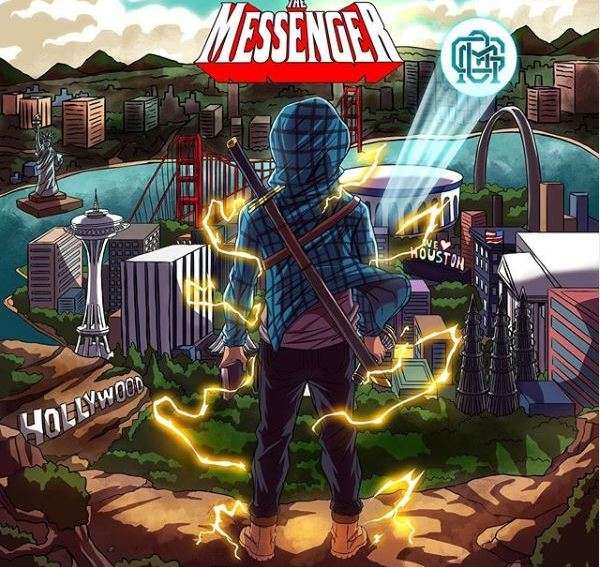 However, this new single is off his latest album titled The Messenger 4 (Independents Day)

Get the latest song below and take a moment to share your thoughts. Don’t forget to browse the homepage for more exciting songs like this.

God created man and gave him his commandment.
Sat him in his garden with everything he planted.
Said this is all yours, son. Want it? You can have it.
All except for this one, cause that one’s just for daddy.
The Devil steps up in it right away with his deception.
Said, “You can be a god if you just taste it. It’s amazing!
You won’t die. God’s a liar.” – throwing shade in his direction.
That small seed of doubt forms a change in his perception.
See, if he had nothing, he’d appreciate that one thing.
God gave him everything, but he’s focused on that one tree.
Sin is here. In his fear, he covered up and hid.
He covered up in leaves; God covered him with skins.

Hold that thought – lets fast forward to Able and Cain.
Two brothers in the same field playing they lanes.
See Cain tended the ground; Abel tended the sheep.
Both made an offer to God, but Cain’s fell incomplete.
Now put a pin in that – let’s hit the Passover, down in Egypt.
When God hears the cries of them beating down his people,
Israel is enslaved – Pharaoh saying they ain’t leaving.
Moses tells him God said it, but he still ain’t want to free them.
So God tells Moses, “Here’s the plan. Pay attention.
Tell my people they’re going to need a lamb without a blemish
One day you going to get it, but for now you just kill it.
Take it home, smear its blood on the door post of the entrance.
See Israel is my firstborn and Israel’s been taken.
If he don’t let my son go, his son ain’t going to make it.
The penalty is death and I’m coming for the payment.
Those covered in that blood’ll be the only ones escaping.

Now lets go back to Abraham, mobbing with his son Isaac.
Faith isn’t faith until it’s tested, so God tries him.
Said I know how much you love your son; go and sacrifice him.
So Abe walks him up the mountain, straps him down, and ties him.
He doesn’t really understand it, but he has faith.
He knows that God’s good, so as commanded he’s grabbing his blade.
As he goes to stab him, the Lord yells, “Wait!”
He looks over, and God sent a lamb in his place.

Let’s take a quick pause now before we get to Jesus,
‘Cause none of this’ll click until you see just why we need him.
The Word of God says the wages for sin is death,
So if sin is how you work, then death should be the check.
There can be no forgiveness without the shedding of blood.
The penalty must be paid if God is a righteous judge.
We say, “Just let it slide,” but if someone killed your cousin,
Would you call that judge righteous if his killer goes unpunished?
Or would you call him crooked, and we know the Lord ain’t that,
So there’s a death penalty, and someone has to pay that.
The moment that you sin your life has been indebted
And his mercy is the only reason he ain’t yet collected.
So that’s why they would sacrifice lambs in their places,
But it didn’t clear the debt – it was just a partial payment.
Now we going to take a recap and see the Lord working.
Nothing was an accident. It all has a purpose.

Now back to the beginning at the fall. Man sins,
Tries to fix it on his own God covers him with skins.
But it never says what animals he’s getting it from.
All we know is to cover man he shed innocent blood.
Now remember Cain and Abel? Cain’s offer was rejected.
You ever wonder why Abel offer was accepted?
All I know is Cain offered the work of his hands.
Abel tended the sheep, so he must have offered a lamb.

Now look at Abraham and Isaac – are you seeing it now?
A ram in the bush sent to take the place of his child.
‘Cause Abraham had faith enough to give up his son;
God would later do the same so that forgiveness would come.
Back to the Passover – aww man, here we go with that lamb again!
The innocent blood of the lamb is covering man again.
You don’t see the pattern, and get what it means?
Then it all becomes clear when Jesus steps on the scene.

“I am the Alpha and Omega, the beginning and end.
I am the Lamb without blemish, sacrificed for your sin.
The Lamb of God without sin! Little children, understand,
You can’t do it on your own, it is Me who covers man!
I am the one who took your place when death lifted up his hand.
Gave you righteousness for faith. You’re the one who broke the law,
But it was I He sent to pay. Gave my life for those who hate me.
I went quietly, and I ain’t even try to beat the case.
I’m the offer he accepts when your works get rejected.
I’m the one who pleads your case before the judge in Heaven.
Knew that you were guilty, but loved you enough to serve your sentence,
The wages for sin is death, I died to expunge your record.

“See I AM the Passover! The wrath of God is waiting!
Every life not covered by the blood’ll be taken!
I’m the way, the truth, the life, and I will always be.
I am I AM! Beloved, it was always Me!”